Chances are you have at least a vague understanding of what vegans eat. You know it’s somewhere between “twigs and berries” and “slabs of beef,” but the gray area between is where it gets fuzzy.  And even if you do understand the concept that vegans don’t eat anything that came from an animal, making a meal for a guest in your home following those guidelines might give you pause.

Last night at the grocery store I ran into a friend who humorously reminded me just that:

“I’m so glad I ran into you” she said “I’m having a barbeque this weekend and just found out there’s going to be a vegan there….I don’t think I have anything for her…”

Out of her basket she pulled a block of non-dairy “cheese.”

Nothing else came out of the basket. She laughed, “I was going to get crackers too but I’m not sure which vegan ones are good.”

Soooo, we had some work to do. I walked her around the store, showing her my faves and go-tos for just such occasion, and in no time she had a grocery haul fit for vegan royalty.

“Thanks so much,” she said on her way out. “I googled ‘hosting a vegan at a barbeque’ and all I got was stuff about hosting a vegan BBQ. I’m not doing that. I’m hosting a regular BBQ and a vegan will be there.”

I could take a few paragraphs to talk about how a vegan barbeque IS a “regular” BBQ too, but we’ll save that for another day!

Right now I’m going to share some tips I shared with her; things you may or may not have thought about if you’ve invited a vegan to your (typically meat-laden) summer BBQ and aren’t really confident you know what to serve.

Grilling the veggie burgers on the same rungs you always cook the beef burgers on results in beef-flavored veggie burgers. Now, to you that might sound more palatable, but not your vegan guests. If you don’t have enough room for separate spaces, pick up some disposable foil grill trays to place under your vegetarian faire on the grill.

Sharing is not always caring

Sharing is usually a good thing, except when it comes to utensils between different food teams. Spatulas, tongs, serving spoons, cutting boards and knives that are used for meat and dairy shan’t be used for plants. All you have to do is make sure to have separate serving spoons for each dish, separate grilling utensils for veg and meat, and never use the same knife (or cutting board) to cut vegan and non-vegan items.

Instead of thinking outside the box too much, you could simply veganize traditional BBQ favorites. Some are simple and some are a bit more on the fancy side, but none will be foreign to your Standard American Diet guests. And the good news is since they don’t contain dairy, they’ll be more outdoor-in-the-heat-friendly than their traditional counterparts.  If you need a jumping-off point, here are some ideas:

Opt for a super salad

If the thought of changing out any of grandma’s recipes for a newfangled concoction seems sacrilege, no worries. You could opt to keep all of the dishes your family counts on as is, and instead add one new plant-based pièce de résistance. This new dish should be fresh, colorful, include protein in the form of beans or legumes, be filling enough that it could stand alone as a meal in of itself, and be pretty enough that every guest will be compelled to try it – not just your vegan visitor.  Who knows, this might just become one of your “make every year because people insist” dishes!

If you’re not sure where to start, here and here are two ideas.

Beware of the burgers & check your buns

If you’re going the burgers and dogs route and decide to grab a box of frozen veggie burgers for your guest, be sure to double check the ingredients. Not all veggie burgers are vegan (some contain egg and/or cheese.) Along those same lines, if you’re buying pre-packaged burger buns, be aware that some contain milk or egg ingredients. And some bread contains honey.  But there are plenty of companies that don’t – so just check the labels.

Be choosy with chips

You might be surprised to know that some potato chips have milk as an ingredient. Obviously the sour cream and onion would be off the table, but some brands use dairy in their barbeque flavor. And, keep in mind too, that hardcore potato chips could be cooked in lard, which would also be a no-go. Pretzels sometimes have butter in them, and gluten free pretzels sometimes have egg.

Many of the snacks and side dishes you typically have at your BBQ are already vegan or can be easily tweaked to be vegan-friendly.

Including a vegan treat with your dessert spread is a nice touch. And you can’t go wrong here; while many Standard American Diet diehards will scoff at vegetable dishes that don’t have cheese, they are much less likely to complain about a cookie that doesn’t have egg.

If you’re lucky enough to live near a Whole Foods or a vegan bakery, this would be an easy thing to outsource. If not, for starters you could check out this  lemon bar recipe or this brownie recipe.

You probably already eat lots of plant-based dishes (or nearly plant-based) already, so you aren’t starting on a totally different planet than your vegan guest.  And you can also count on the fact that he or she is used to planning ahead for these events.  Vegans rarely arrive to an event already hungry because they never know if there will be a lot for them to eat – especially if they don’t know the hosts well. Also, there is a chance that they’ll offer to bring a dish to the party – a way to contribute but also ensure there is something safe for them to eat.  If they do, take them up on it.

Either way, they’ll be appreciative of the effort you put in to assuring they have plenty of options! 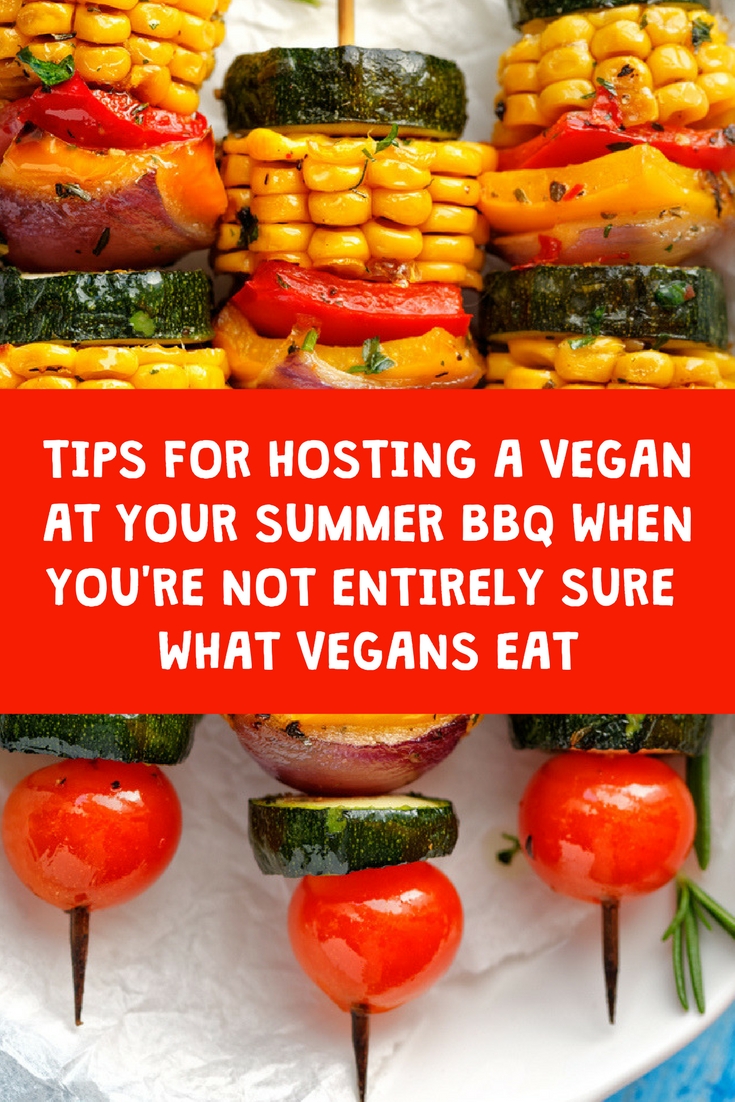 Chicken, fish, or neither?

3 ways to be a gracious vegan or gluten-free wedding guest.

Keep your diet without a riot!