I think I might have had one of the easiest transitions to veganhood in the history of the club. Probably because I didn’t set out for that to be the end goal. Oh, and I didn’t rush…it was a journey that took just under 20 years!

Because I took the scenic route becoming a vegan never seemed like a monumental event.  In fact I don’t  have a V-Day like those who made the switch cold tofurkey. It was just kind of a natural progression so I didn’t think to note any dates in my head.

I feel bad every time someone tells me “I’d love to be a vegan but I don’t think I could do it.” I feel bad because it does not have to be a struggle! You can get there without major cravings, frustrations, or generally hating life.

If you’re on the fence because you’re scared, then might I suggest you’d be a good candidate for taking the scenic route to veganhood.

Below I’ll list out the easiest way to get there while maintaining sanity. (And it won’t take 2 decades to get there like me!)

Let me start with the number one beef I have with the many “going vegan” books on the market.  Lots of them suggest you don’t have to give up your favorites (pizza, burgers, tacos, etc.) as they are replaceable with a plethora of faux options.

I agree with part of that. There are plenty of vegan options on the market.

I take exception, however, with the idea of thinking of them as “replacements” for meat. I haven’t had a cheeseburger in over 25 years but you’re not fooling me into thinking the vegan version tastes the same. It just doesn’t.

That doesn’t mean the vegan version is not as good. It’s just different. It’s what my husband and I refer to as the “Pizza Hut” rule. We both grew up eating good east coast pizza.  We also grew up with Pizza Hut. We never mixed up the two though. You either had a craving for pizza or you had a craving for Pizza Hut. One could never stand in place of the other. They’re equally as good, but they’re not the same thing.  BTW I haven’t had the Hut since back in my dairy days but the rule still applies!

To suggest you could go from cheesesteaks to cheezesteaks seamlessly, means you’re being set up for disappointment. They aren’t the same and they won’t taste the same and that’s okay.

The truth is that you will no longer eat cheesesteaks. And you don’t have to pretend you will. There’s no reason to.

You can, however, enjoy a seasoned seitan sandwich with all the fixins. It’ll have a similar look to a cheesesteak, and it’ll still have the same guilty-pleasure-comfort-food vibe you enjoyed about cheesesteaks. But you aren’t going to be thinking you’re eating a cheesesteak.

So, my best piece of advice when transitioning to a vegan diet – don’t start with meat replacements.

In fact, for best results in making the transition, there is a particular order you should go about things:

You can’t go wrong with the add, eliminate, then replace method!

In the beginning don’t take anything away and don’t buy faux meats. Continue eating your carnivorous cuisine (only if you crave it) but start finding plant based recipes that you really, really enjoy. Eat them often. Find more recipes and eat them often.

During this time, seek out good vegan restaurants or restaurants with plant-forward menus so you can get a feel for the variety vegan food can offer you.

After a few weeks or a few months you will have built up a large library of vegan meals that you truly enjoy and look forward to. You’ll start craving these foods and will find yourself naturally eating less meat because you have so many other good options.

Now you can begin taking away meat from the menu on purpose. Start with one type of meat for a few weeks. Let’s say, cows. So from now on, no more hamburger, but you can still have your chicken or fish or whatever else it is you want.

Once you get used to that, axe the chicken. (Ha! That sounds terrible doesn’t it?! Don’t literally axe any chickens…that would defeat the purpose of this whole vegan thing!) After you’ve nailed going without beef, move onto fish, etc.

When it comes to dairy and eggs, the process is a bit more blurred, but try it this way:

Just like meats, you don’t have to give up dairy right away. Start replacing it incognito. For example:

Begin adding foods or prepare them in ways you might not have before. For instance, when ordering pizza load it with roasted vegetables. A good roasted veggie pizza will not need cheese. Seriously. If you think it does, it probably isn’t a good pizza. Start ordering your sandwiches with avocado slices. Find snacks that will satisfy you that have nothing to do with hunks of cheese.

You’re not restricting yourself from dairy at this point, but you’re starting to develop a broader palate so you’ll have more foods from which to choose later when you do eliminate the dairy totally.

After you’ve grown accustomed to the above changes, it’s time to start gettin’ rid of some stuff.

Just go without it. If you did your due diligence with broadening your palate as mentioned above, you will have a library of deliciousness and you won’t miss the cheese as much.

Do yourself a favor and don’t use any non-dairy cheese for a few months after you’ve eliminated dairy cheese. Like the Pizza Hut example, it does not taste the same. The more time you put between dairy cheese and rice cheese the more likely you’ll enjoy it.

The bottom line is that while some people claim to be, there are actually no vegan police.  This means no one can cite you for doing it wrong.  Whether it takes you 2 weeks or 2 decades, it’s your journey and you can set your own set of rules for getting there. 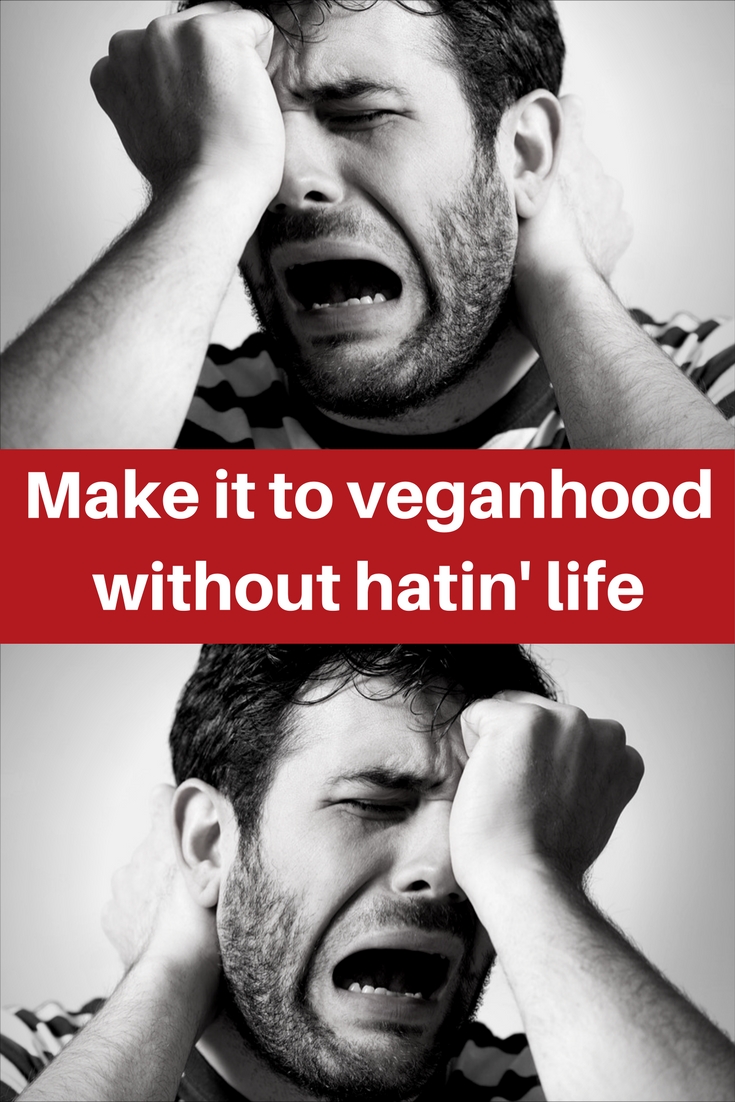 I gave tips about understanding if you’re ready to go vegan in this article.

Not that big of a deal black bean burgers; vegan & gluten free

Customizable and hard to screw up

Chicken, fish, or neither?

3 ways to be a gracious vegan or gluten-free wedding guest.