On 9/6/16, the fitness world lost a valued contributor. I’d like to tell you what she meant to me.

I’m constantly in awe of how each and every decision, action, and event in my life had to have happened exactly the way it did for me to be where I am today, doing what I do, loving who I love.

Some people along the journey stand out as shining reminders that the Universe knows exactly what it’s doing. Seasun is one of those people for me.

It was no accident I moved to Abington PA, began teaching at the same club where she was also teaching, and randomly popped into her step class one Sunday morning.

Except it wasn’t random; it was the Universe working its magic.  I had no idea who Seasun was before I walked into her class that day, but it turns out I was exactly where I was supposed to be.

At the time I was feeling a bit uninspired. I knew teaching and training came naturally to me – every part of it. I knew I couldn’t NOT teach – it was who I was. I loved my clients.  I loved my classes.  But I felt I was missing something. I just didn’t know what.

And then Seasun came into my life.   Scratch that – I came into Seasun’s life! (That’s how it worked – she was at the epicenter of personality, fun, excitement and craziness, and you had to buckle up and hold on if you were gonna survive!)

That first class, I stood in the back (as I always do) and spent an hour tripping around my bench. I’ll never forget approaching her after class to ask for help with a particularly complex sequence.  I don’t remember her actual answer, but this is what I heard in my head: “Oh, it’s super simple…you just do 3 cartwheels, a backflip, spin around ten times and you’re done.” (If you’ve ever stepped with her, and remember your first time – tell me that’s not what it sounds like she’s saying?!)

That was the moment I knew I had met my match! Someone who valued creativity, fundamental teaching skills, pushing choreography boundaries, and someone who, when she put on that microphone, was absolutely at home.  I saw so much of myself in her.

Except that in many ways, we were total opposites.

For instance, she was charmingly impulsive. When she decided on something, it happened. Yesterday. When I decide on something, I put it on a to-do list and evaluate it for a few weeks. One time she asked me to team teach with her – a ViPR and TRX combo – something we’d never taught together before.  I was thinking we probably should come up with some sort of game plan.  The night before I texted her to do just that.  Her response:  “Plan?!?  We’ll just do it.”  And so we did, and it was awesome.  But only with her beside me would I dare step up to the plate with absolutely zero strategy!

Another of our differences was that she was one of those rare breeds who looked just as pretty after a workout than she did before. Always with make-up, jewelry, and hair just right. I wore mascara to teach once in my life and people talked about it for a week. I remember one incident during the video shoot of Super Step, when her gorgeous hoop earrings were hitting the microphone and causing a problem and she was told she had to take them off. It was the first and only ever “deer in the headlights” look I’d seen from her. “I’ve never NOT worn earrings in my life” she said, “I don’t think I can step without them!” Because going with no jewelry is my specialty, I gave her the stud earrings I was wearing at the time, just so her lobes wouldn’t feel naked.

After participating in her classes for a while she asked me to be involved in two of her DVD projects.  We had so much fun.  So. Much. Fun.  At some point after they were done she said to me “You need to be doing this. I’ll help you. But you need to do this.”

She helped me prepare for my first DVD shoot back in 2012. Popping in on rehearsals, being a sounding board for ideas, and offering good advice. (Funny thing – she always complained she couldn’t do my workouts  because they went “too fast” and her body didn’t move that way. My response to her?: **blank stare**)

But she supported me every step of the way, and became a cheerleader for all my endeavors since.

While I considered her my mentor and inspiration, she also respected me as a professional and I was always honored when she’d call me up to ask me to brainstorm with her about various things.  She took a genuine interest in my ideas, solutions and creative pursuits.

I valued our friendship, of course.  I could fill up another post about incidents in her presence that caused me to laugh ’til it hurt.  Or how she was the best hugger in the world; she squeezed like she hadn’t seen you in ages – every single time.  Not to mention the fact that, through her, I met so many other kick-ass people I might not have otherwise met. 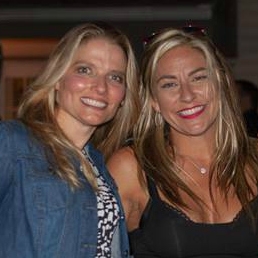 But let me take off my friend hat for a moment and put on my fitness professional hat because I need to tell you just how good she was at her craft. Her brain was freakishly talented when it came to creating, delivering and intuitively understanding choreography.  Truly, I’ve never seen anything like it.

I always thought I had a decent handle on the science and structure of choreography. But really, all I had was just enough to recognize how brilliant she was at it.

You see, when most people came to her step classes they only got half the story.  They showed up because this beautiful and upbeat woman delivered a great workout experience.  Flawless, in fact.  They spent an endorphin-filled hour jumping around at crazy speeds (she liked to step faaaaaast!) They were challenged and they had a blast.  They didn’t know how it worked, they just knew it worked and it was awesome.

The problem for me was that I couldn’t let it go at that.  Nope.  I couldn’t just have a good time like everybody else.  I needed to know how it worked.  My mind was always taking notes and trying to learn from her.  I was dissecting her method of building choreography.  I tried to get into her head, wondering if I could figure out how all this stuff she was throwing at us would eventually fit together in a combination; I tried to figure it out before she actually cued it. Sometimes I got it right, but mostly I didn’t!

She never brought notes into class.   She told me she’d have a general idea of what she wanted to do before she got there, but then made it up on the fly. (Although, I do know that a spiral-bound notebook of her choreography ideas does exist because I saw her write in it once.  Damn, I’d love to have that notebook.)

Often times during the warm-up she’d be quiet for a while, and then say with a grin “Trying to decide what to do with you today!” Which meant she was making it up in her head right there on the spot.  She’d then proceed to teach three 64 ct. combos, splice them at the end, and keep them all straight without once looking at notes.

I’m really trying not to geek out on you here, but I can’t help myself!  I get excited about people who are masters of their craft!

My favorite thing to witness is when she would decide – right in the middle of cueing a 64 ct. combo – that she didn’t like part of it and wanted to change it. (Remember that impulsivity I talked about!)  While she was cueing the current combo she’d be deciding in her head how she wanted to change it, be able to cue the new move, and then land it perfectly – always on the correct lead leg.

Another favorite part of class was a certain “look” she’d give me. I always knew exactly what the look meant: “Am I off the phrase? If so, can you find it for me?” (If you aren’t familiar with choreography, the “phrase” is the 32 counts of music around which a block of choreography is built.) I’d give her the corresponding “look” back, signifying the start of the new phrase. And we went on like nothing had happened, and no one in class was really the wiser.

I only knew her for 10 years but man, it feels like a lifetime was packed in those 10 years. She inspired me in so many ways, and she was the kick in the pants I needed all those years ago when I first walked into her class. I’m forever grateful to the Universe for putting me in the path of her orbit. Something tells me a part of her will always be in my work. And if it is, I’ll be so, so proud.

We’re missing the forest for the tree poses

Before you get on your diet and exercise soapbox, decide if it really is the best use of your time.

Examining quotes that influence us to take positive action.